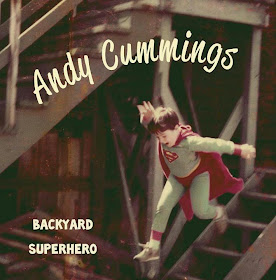 With his Coppertop shows last season and appearance at the MusicFest in September, Andy Cummings has quickly become a Wachusett favorite, so much so that he was tapped to perform Saturday, Dec. 22, for the ski area’s 50th anniversary. Cummings will be the party entertainment from 2 to 5 p.m. in the Coppertop.

Watching Cummings, it takes no more than a couple of songs to know how well the guy can sing and play guitar. But the real eye-opener may be how seamlessly he moves from smooth crooning to fist-pumping anthems.

That talent is especially pronounced on “Backyard Superhero,” Cummings' new CD. The dozen songs are all over the place, from the roots-rock hijinks of “I’d Like to Tell You More” to the urgent folk-pop of “Your Only One” to the edgy new-New Wave glimmer of “Trial on TV.” I’ve already started jokingly calling this record “Andy Cummings Radio” simply for its diversity.

But “Backyard Superhero” is not scattered. Cummings creates not so much an arc, but waves that rise and fall around his knack for knocking out songs that sound like he is channeling them from a bygone era of big microphones and bigger sentiment. “I Wish,” which begins the record, is just such a song, with a breezy melody and colorful wordplay (“I wish I were an ocean so I could wash away some of the things I say.”)

The original “Be My Delight” and covers of “After You’ve Gone” and “Hello! Ma Baby” (the latter radically overhauled from the way you may remember it as performed by a singing frog in the Looney Tunes cartoon) are the other old-timey tunes peppered among the album’s dozen tracks in a way that sets up a smooth flow for Cummings to explore other song styles

He nails a rustic country vibe covering Amy Allison’s haunting “Thank God for the Wine” and pays homage to the late Scott Ricciuti, one of the region’s songwriting greats, with a tender rendition of Huck’s “Postcard,” the “wish you were here” refrain coming off as especially poignant.

Cummings’ songwriting is sometimes overlooked in his live shows, since they incorporate a lot of interpretations of others' work. "Backyard Superhero" rectifies that situation, especially with “You’ll Understand,” a defiant, quietly turbulent acoustic song that shows how this troubadour is a hell of a writer too.